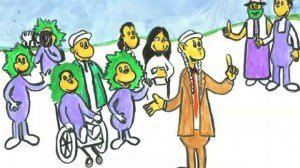 The video, which was sent out in a press release, uses Dr. Seuss style animation and rhyming to summarize the current travesty of our medical cannabis policies, as well as the attacks on Harborside’s clinic, which has faced continual attempts to be shut down. The title is in reference to U.S. Attorney Melinda Haag, who has been one of the guiding forces in attempting to close the dispensary.

“We could’ve made a documentary that showed how stressed out and worried we are, how petrified our families are, not to mention our employees…Being in the cross-hairs of the feds is scary as hell. But one of the powerful lessons that cannabis has to teach us, one of the healing properties of the plant, is the sense of humor that it brings out in us–the childlike quality that should be a part of our adult lives and is often lost in our modern and hectic world. Cannabis can help restore this and that is the spirit in which ‘The Haag’ was made”, said  Dr. Andrew DeAngelo, Director of Harborside, in the press release.

There was once a land called NorCal, amongst the cannabis trees..

..where the folk that smoked their flowers, lived a happy life, in peace

But an ancient law dictated, that all cannabis is bad..

..so the G-men confiscated, every flower that they had..