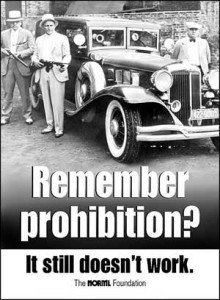 to gain, all of them financially. The black market profits directly. There are no regulations around health, safety or child welfare. There are no taxes to pay, and prices are driven up by the prohibition.

Terrorists benefit because the market our government refuses to regulate can be used to fund their efforts. It doesn’t matter if they’re in the streets of Chicago, the cities of Juarez, or the poppy fields of Afghanistan. Gangsters and terrorists are both organized criminal enterprises because prohibition gives them a bottom line to protect.Law enforcement benefits from the tax money that rains down on them to stop the scourge of harmed children.

The forfeited assets sold at auction and federal grants raise money for the paramilitary gear needed to break into homes and tear families apart. What’s more, drug laws create ways to bypass probable cause and search and seizure protections.

The oppression of undesirables has always been a strong motivator in the cause of the Prohibitionist. Jazz musicians, migrant workers, and antiwar protestors have all felt the lash of the Drug War. When Nixon launched the federal Drug War, it was for the specific purpose of disenfranchising opposition voters.

The average politician’s temptation to look tough on drugs is only too easy to understand. An alarm is raised, laws are enacted, mandates get funded, and cheap political points are scored. Most importantly, though, political campaigns get funded because Big Business is anti-marijuana.

That brings us to the last anti-marijuana profiteer: Industry. The reason this insanity has persisted so long is that the Drug War is in fact an industrial ban on hemp. Reefer madness was a fire started by DuPont, and Hearst newspapers helped fan the flames. Why would Big Pharma ever let something like a cannabis dispensary system undermine a sweetheart giveaway like the Medicare Drug Benefit?

Ending marijuana prohibition would cut this disgusting enterprise by half. But how does it end? Simple: citizen’s initiatives to legalize cannabis, circumvents the politicians. After all, those who benefit from cannabis prohibition cannot be expected to repeal it.