Washington To Begin Accepting Applications In November From Marijuana Retailers

Washington To Begin Accepting Applications In November From Marijuana Retailers 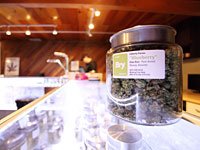 market. Beginning on November 18, regulators will begin formally accepting applications from those seeking state licenses to commercially produce, process, and sell cannabis to those age 21 and over. A press release regarding the state’s forthcoming rules and the application process is available here.

Under an initiative (I-502) enacted by voters in November, the adult possession of limited quantities of non-medical marijuana — as well as the state-licensed production and sale of cannabis — is not subject to criminal penalty. Voters in Colorado approved a similar measure in November authorizing state-licensed marijuana production and retail sales. Colorado state regulators began accepting applications from would-be marijuana producers and retailers earlier this month.

In an August memorandum, Deputy Attorney General Cole directed the US Attorneys in all 50 states, including Colorado, not to interfere with the implementation of state marijuana regulations unless such activities specifically undermined eight explicit federal law enforcement priorities.

Both Colorado and Washington are anticipated to have licensed marijuana retail outlets operational by early next year.