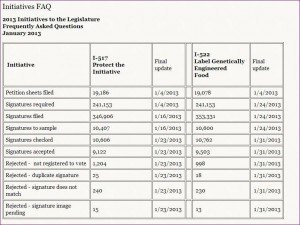 Final signature statistics for I-522.

Ending with over 300,000 valid signatures from Washington State residents, Initiative 522 has officially qualified for the general election ballot in November (unless legislators vote to pass it during the current legislative session).

If passed, the measure would establish mandatory labeling of foods produced through genetic engineering. It would set up legal, monetary penalties for companies who don’t abide by the new requirements.

The initiate is being spearheaded by Chris McManus, the Campaign Manager for Label It WA (the sponsor of the measure), and his wife Leah.

Prior to working on this initiative, Chris and Leah were county coordinators for the non-profit political committee Sensible Washington, working towards a repeal of cannabis prohibition. The duality between the movement to force labeling of GMOs (genetically modified organisms), and the movement to reform our cannabis policies, is clear. As cannabis inevitably becomes legal across the nation, and as big corporations try and sink their teeth into the new industry, changing society’s mindset (and laws) as it regards to genetically modified ingredients is vital.

We here at TheJointBlog may not share the same opinion as everyone else, but when it comes to legal cannabis we would much prefer the option of knowing if the cannabis we’re buying contains GMOs, and if given the choice, we’d rather buy some without.

Initiative 522 is a major step in giving us that option.