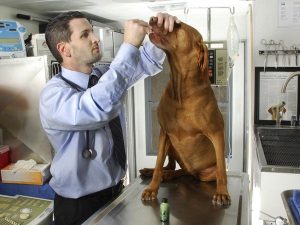 Veterinarian Doug Kramer considers his work to be “enlightened”, even naming his clinic the Enlightened Veterinary Therapeutics. When hearing about his out-of-the-box methodology, it’s hard to argue.

Dr. Kramer administers medical marijuana to dogs, especially those with late-stage cancer. He does so in his clinic, and is undeniably vocal about it. He’s not hiding what he’s doing, and instead is making sure to spread the word as far and wide as he can.

In an article published recently on Dogster.com, one of the largest dog sites in the world, Kramer states, regarding the decision to go against the law:

“The decision was an easy one for me to make…I refuse to condemn my patients to a miserable existence for self preservation or concerns about what may or may not happen to me as a consequence of my actions. My freedom of speech is clearly protected by the First Amendment to the Constitution. This is an issue of animal welfare, plain and simple. Remaining silent would represent a clear violation of the veterinarian’s oath I took when I was admitted into this profession.”

On his website, Dr. Kramer notes that; “Overwhelming documented and empirical evidence suggests that there is a role for medicinal marijuana in veterinary medicine…In many, many scientific studies, THC and its synthetic derivatives have been shown to be effective in most animal models of pain.”

Dr. Kramer, who’s the first veterinarian in the country to (at least openly) administer medical cannabis to dogs, is not a medical cannabis patient himself. His venture started when his dog, Nikkita, was diagnosed with cancer. This led to Dr. Kramer studying recent cannabis research, which pushed him to create a homemade cannabis tincture, which he administered to her.

Dr. Kramer, who spoke with us briefly, states; “It restored her appetite, made her lively again. It was a complete turnaround and she got to live her final days in a much better way.”

After Nikita’s death, Dr. Kramer felt bound to continue harnessing cannabis as a medicine so that he could help other dogs with terminal diseases that may benefit from it. This led to him opening Enlightened Veterinary Therapeutics, which specializes in palliative and hospice care, and is the first and only clinic in the country to offer cannabis consultations as a pet treatment plan.

In summary, Dr. Kramer hopes that his message spreads, and that we change our laws to enable doctors and others to truly study and recognize the vast benefits that medical cannabis can bring, whether you’re a human, or a dog.