According to the United Nation’s 2012 World Drug Report, 5% of the world’s population consumes cannabis.

The report indicates that in 2010 (the most recent data accumulated) up to 225 million people consumed cannabis – approximately 5% of the global population. In countries like America and New Zealand, the number is above 10%. The report states:

Cannabis is a truly global phenomenon. Reports on cultivation and seizures of cannabis and on sources of cannabis products illustrate that cannabis is not only consumed in all countries in the form of cannabis herb (marijuana), it is also grown in most of them.

This leads one to wonder; if cannabis is so non-toxic, and used throughout the world, why is it considered so taboo, and categorized as an “illicit” substance? The fact of the matter is, this study shows the magnitude of the effect of prohibition on a global scale; 5% of the people in the world are instantly considered criminals, just for their use of this therapeutic substance. This is at a time when pharmaceuticals run rampant in our society, with doctors pushing Xanax, Oxycontin, and a plethora of other drugs without a second thought (neglectfully ignoring the potential side-effects of these prescriptions). 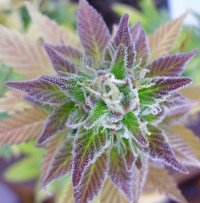 The study also indicates that the production of cannabis is primarily “localized and often small-scale” in nature, a distinctive difference from the massive production of hard drugs that cartels manufacture in huge quantities. For those in the cannabis community, this likely comes as no surprise, as many of us know someone down the street growing a small garden to supply themselves with their medicine, or perhaps a little extra to share with friends. It is difficult to understand how this could be considered criminal, when the impact on society is the same as someone growing tomatoes in their backyard – or potentially more beneficial, as cannabis is incredibly medicinal. The negative consequence comes in keeping cannabis illegal, as it allows criminal syndicates to benefit from it.

Nevertheless, the U.S., reportedly “the country with the world’s largest cannabis market”, maintains the destructive prohibitionist policies that result in thousands of incarcerations, and billions of dollars lost. Common sense dictates the only logical approach to this situation is legalization – and the citizens of this country, and those around the world, are taking a stand, proclaiming they are no longer willing to accept the injustice of prohibition.

As a further demonstration of how the war on cannabis, and cannabis consumers, has failed, the study concludes:

There are currently no indications that cannabis production and use are going to diminish.

There you have it.
– TheJointBlog

3 thoughts on “United Nations: 5% of the World’s Population Uses Cannabis”