The United State Army has recently released an article on their website urging people away from the alcoholic drink Purgatory, a vodka. Not caring about the fact that it’s a strong alcoholic drink, which is entirely fine for soldiers to take 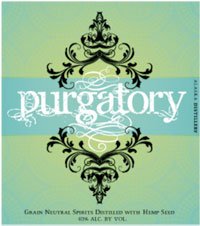 part in, the Army instead takes issue with the fact that this particular vodka is made with 20% hemp seeds. The product is sold legally throughout the U.S.; it goes through a stringent process to ensure that it contains no amount of THC. Like other hemp products, there’s nothing illegal about the drink on the federal level.

However, the Army doesn’t care, stating: “What must be stressed among military personnel is that even though Purgatory Vodka is said to be free of THC, and even though hemp byproducts are not illegal in the civilian world, this gives zero justification to those in the military…It is the ‘prohibited use’ that soldiers need to remember.”

The article points to AR600-85, the “Army Substance Abuse Program”, which explicitly disallows the use of hemp products by soldiers, including any of its derivatives: “this regulation prohibits Soldiers from using hemp or products containing hemp oil.”

This is brainwashing at its absolutely worst. There’s no reason for them to deny soldiers the use of hemp products any more than they would object to their use of aloe vera. Even among this ridiculous prohibition on cannabis, it’s entirely legal to possess and use hemp products – as long as you don’t cultivate the actual plant.

The only reason that can be seen for the Army continuing to push this archaic portion of their rules, is to try and sway their soldier’s opinion on hemp and cannabis policies. When you consider how incredible of a protein hemp seeds can be, denying our soldiers even the ability to consume hemp seeds or hemp seed oil is absurd.

As many know, it wasn’t too long ago that our government was promoting the propaganda video “Hemp for Victory“, which laid out how important it was for Americans to get behind hemp as an industrial commodity. The government even gave draft deferments to farmers willing to grow hemp, and handed out hemp seeds themselves.

As citizens, we should be speaking out on behalf of our soldiers: The U.S. Army has absolutely no right or justification to deny soldiers the use of a crop that, indicated by congressional research, has a legal market in this country of over 25,000 various products, ranging from foods to clothing.