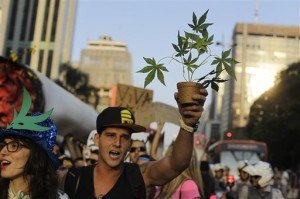 “In many countries, marijuana use is allowed, but here we have these reactionary policies. Today we would say that drugs do not kill, what kills is the war on drugs,” said Carol Ribeiro, one of the prime organizers of the protest, which began as a march.

While pounding drums and shouting for legalization, protesters held banners and signs with statements such as, “Less hypocrisy, more freedom”, and “Legalize, Dilma!” (Dilma Rousseff is the nation’s president).

Although police tried to downplay the number of attendees, putting it at around 1,000, Ribeiro and other protestors believe the audience to be around 10,000.

The protest comes just weeks after Brazil’s Supreme Court has decided to take up the issue of whether or not criminalizing the possession of drugs for personal use is constitutional.