Study: 100% Of Those with Migraines, Fibromyalgia and IBS Find Reduction Of Pain with Marijuana

Study: 100% Of Those with Migraines, Fibromyalgia and IBS Find Reduction Of Pain with Marijuana

By The National Pain Report

One-hundred percent (100%) of people with migraine headache, fibromyalgia or irritable bowel syndrome who use medical marijuana for a minimum of 30 days report a reduction in pain and discomfort, a 6-month study conducted by Care By Design found.

“A majority of patients (88.2%) reported that cannabis therapy improved their overall sense of wellbeing,” the study found. “Patients with fibromyalgia, headaches and migraines, PTSD and anxiety reported the greatest improvement in general wellbeing (as compared to other patient groups).” 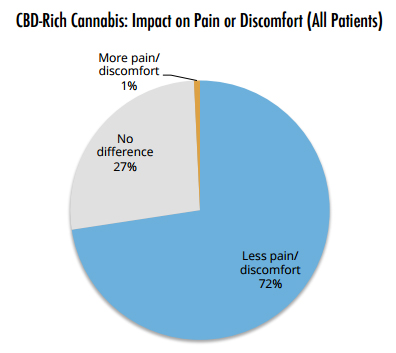 “A majority of all patients (64.2%) reported an improvement in mood.  All patients (100%) with PTSD and spinal cord injuries reported an improvement in mood. Some patients with sleep problems (8%) and cancer (3%) reported a worsening of mood. While a majority of patients taking CBD-rich cannabis for “general wellbeing” rather than for a specific medical condition reported improved mood (66.7%), this group was also the most likely to report a worsening of mood (16.7%).”

The survey was conducted by Care by Design, which sells CBD cannabis sprays, oils and vape cartridges, so the survey has some weaknesses.  A high percentage of survey participants (42%) reported that they did not know the ratio of CBD-to-THC they were taking.

“This report represents preliminary data based on less than one thousand patients. It is not meant to provide patients with guidance on dosing or medical treatment. Rather, it is meant to suggest possible areas for additional research.”