Report: Minorities Drastically More Likely to be Searched and Charged for Drugs in the UK

Report: Minorities Drastically More Likely to be Searched and Charged for Drugs in the UK

A new report released by the London School of Economics and Political Science has found that minorities are drastically more likely to be stopped, searched and charged for drugs in the UK compared to someone who’s Caucasian. 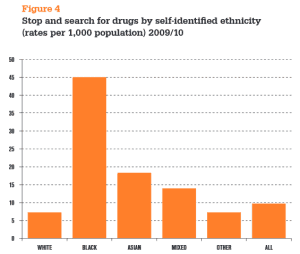 This chart does a good job of detailing the disparity in drug searches.

There was an even larger disparity when it came to cannabis charges; “Black people caught in possession of cannabis by the Metropolitan Police are less likely to receive a cannabis warning than white people, and are charged at 5 times the rate of whites.”

The report found that, regardless of race, police in the UK stop and search someone for drugs every 58 seconds, with only 7% resulting in arrest.

According to Michael Shiner, co-author of the report and senior lecturer in the department of social policy at the London School of Economics: “It’s shocking that police officers are spending so much time targeting minor drug offences, rather than focusing on more serious matters. This is not the result of a carefully considered strategy, but is the unintended consequence of reforms that have created a perverse incentive structure, rewarding officers for going after easy pickings rather than doing good police work.”

Some other notable points from the report include:

These results paint a clear picture of the institutional racism that the drug war has created in the UK, which is similar to a recent report in the U.S. which found that the war on drugs has primarily been a war on minorities.

Giving racist judges and law enforcement officials a legal weapon to attack minorities is one of primary reasons why we need to bring the drug war to a swift and effective end.