Reminder: There’s No Such Thing as a Marijuana Overdose

Reminder: There’s No Such Thing as a Marijuana Overdose 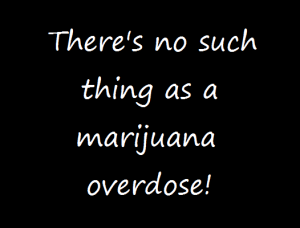 This is an anomaly among substances that we as humans can consume. Everything else has a fatal dose, even water. Water, for example, has an easily detectable LD-50; the amount at which consumption will kill half of those who consume that particular amount.

Scientists have yet to discover – and in all reality never will – the LD-50 for marijuana. This infuriates prohibitionists.

Scientific research has also been blatantly clear that marijuana doesn’t lead to overdose deaths, and never has.

A 1997 study funded by the National Institute on Drug Abuse (NIDA), and published in the American Journal of Public Health, found that no degree of marijuana use had any effect on mortality. A 2003 WebMD article makes note of two other studies which indicated the same thing, something that Stephen Sidney, MD, wrote about in The British Medical Journal.

Most importantly among the science, is the simply fact that no one has ever been recorded dead based simply on marijuana consumption.

You’d have a hard time finding any other substance on this planet that you can say that about.