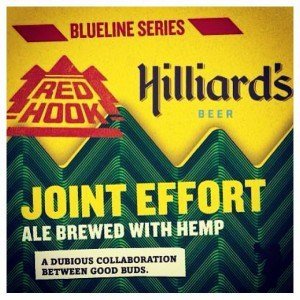 , which is being released in celebration of cannabis being legalized in Washington State.

This new brew will be available by draught only starting on July 15th, and will launch in 22 ounce bottles under the Blueline label in late October; it will be sold exclusively in Washington State.

According to Redhook’s press release, the beer will be brewed with – in addition to hemp seed – Zeus, Cascade, Summit hops (ABV 5.6%, IBU 25), and will have a “dank, resinous hop aroma balanced by nutty, earthiness from hemp seeds”. Redhook claims that it’s “the perfect brew for hanging with your buds, grabbing some munchies and enjoying a beer.”