Tomorrow, on the capitol steps in Idaho, Sarah Caldwell and Lindsey and Josh Rinehart will be hosting a press conference to address the removal of their kids over 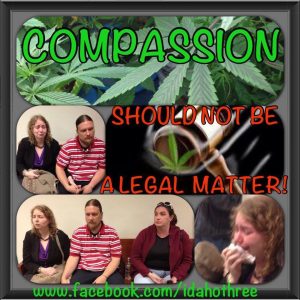 the use of medical marijuana. The press conference will be used as a vehicle to spread the word on the injustice of the situation.

The four young boys who were removed from these activists – two Sarah’s, two Lindsey and Josh’s – are ages 11, 10, 6, and 5. They’re currently being held by the State of Idaho Child Protective Services. Removing these children from their families, over their use of a non-lethal medicine, is absurd and disgusting. Studies have shown that children living with cannabis consuming parents, or living in a grow-op, are at no more safety risk than any other child. However, removing children like this from their parents, is emotionally devastating for both the children, and the parents.

The children were taken into custody while Sarah, Lindsey and Josh were away on vacation – the children were being watched by a babysitter when police showed up to perform a “well child visit” (this was after interrogating one of the boys, after one of their friends had got in trouble for something unrelated). They subsequently bullied themselves into the house, finding marijuana which was used by Lindsey as medicine to treat her multiple sclerosis. Many believe that the attack was politically motivated, as Lindsey had, just days prior, made it known to the state’s legislature that Compassionate Idaho is working to put a medical marijuana legalization initiative on the 2014 ballot. Either way, the police certainly didn’t have the welfare of the children in mind, or they never would of been removed from their parents.

The press conference will take place tomorrow, April 29th, at the steps of the Idaho State Capital (at 700 West Jefferson Street in Boise), and will begin at 2PM. If you’re in the area, we urge you to attend the event and show your support. If not, please help spread the word of this travesty!

[Thanks to an update by Lindsey Rhinehart (comment below), we were made aware that, thankfully, Sarah Caldewell’s children have been returned. However, Lindsey and Josh’s children remain tragically removed from them.]