Prehistoric Cave Paintings Inspired By Psychedelics, According to New Research

Prehistoric Cave Paintings Inspired By Psychedelics, According to New Research 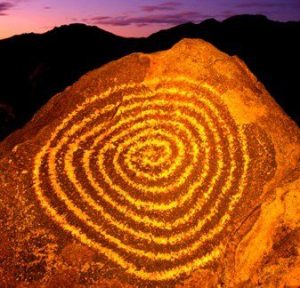 Patterns like this, found in ancient art around the world, may be inspired by psychedelic visions.

A new paper published in the journal Adaptive Behavior (the official journal of the International Society of Adaptive Behavior), and funded by the Japanese Society for the Promotion of Science, presents evidence that prehistoric cave paintings, dating back 40,000 years or more, are quite likely inspired by ritualistic psychedelic experiences.

The study, through an examination of research on prehistoric art and psychedelic experiences, offers new insight on the creation of such phenomenal imagery.

The abstract reads as such:

“It has been argued that the worldwide prevalence of certain types of geometric visual patterns found in prehistoric art can be best explained by the common experience of these patterns as geometric hallucinations during altered states of consciousness induced by shamanic ritual practices. And in turn the worldwide prevalence of these types of hallucinations has been explained by appealing to humanity’s shared neurobiological embodiment. Moreover, it has been proposed that neural network activity can exhibit similar types of spatiotemporal patterns, especially those caused by Turing instabilities under disinhibited, non-ordinary conditions. Altered states of consciousness thus provide a suitable pivot point from which to investigate the complex relationships between symbolic material culture, first-person experience, and neurobiology. “

Essentially, research shows certain geometric patterns found in cave paintings from all over the world are incredibly similar to the hallucinations experienced by humans consuming psychedelic substances. It is a popular thought in the scientific community that these specific geometric patterns seen by those on psychedelics are actually visualizations of neural patters and cellular structures of the brain: “Researchers also generally claim that the geometric hallucinations experienced by the subject are mental representations of these neural patterns. ”

“Interestingly, these patterns represent only a small subset of the potentially infinite set of possible abstract visual patterns that could be created, and it seems that certain kinds of pattern are particularly frequent, such as dots, circles, cross-hatchings, parallel wavy lines, and especially various kinds of spirals (Lewis-Williams & Dowson, 1988). An important clue to the origin of this selective bias was found by psychologists investigating the experiential effects of various kinds of alterations of consciousness. They discovered that the patterns of many visual hallucinations could be categorized into a small number of so-called ‘‘form constants’’ (Kluver, 1967). In the 1920s, Kluver had systematically studied the effects of mescaline (the main psychoactive compound of the peyote cactus, Lophophora williamsii) on the experience of its users (including on himself). He observed that the non-ordinary visual experiences were often characterized by similar kinds of abstract geometric patterns, which he classified into four categories of form constants: (1) gratings, lattices, fretworks, filigree

s, honeycombs, and checkerboards; (2) cobwebs; (3) tunnels and funnels, alleys, cones, vessels; and (4) spirals. Kluver’s form constants have since been found to occur in a variety of other kinds of altered states (Bressloff, Cowan, Golubitsky, Thomas, & Wiener, 2001). Intriguingly, these form constants turned out to resemble many of the abstract motifs that are often associated with prehistoric art from around the world, including Paleolithic cave art in Europe. These insights led to the provocative hypothesis that much of the content of prehistoric art was inspired by patterns and visions seen during altered states of consciousness (e.g., Clottes & Lewis Williams, 1998; Lewis-Williams, 2002; Lewis-Williams & Dowson, 1988; Winkelman, 2002).”

Overall, the scientists behind the study state that, “The aim of this paper is to contribute to this enactive approach to the various interplays between biology, culture, and consciousness, in particular by critically examining the role of altered states of consciousness in the generation of geometric prehistoric art.”

This new look at the prominence of the use of psychedelics in ancient human culture will surely inspire further research on how these now-considered “illicit” substances played a monumental role in early human development.