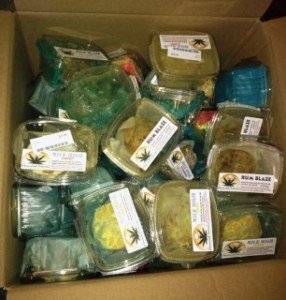 One of many boxes of marijuana and marijuana-infused products that police were forced to return to two California dispensaries.

Police in Vallejo, California have returned over $200,000 worth of marijuana, including 60 pounds of dried bud, and boxes full of marijuana-infused food products, to two dispensaries in the city after a judge ruled that they were illegally raided. The police also returned hundreds of now-dead plants: Scott Candrell, an attorney for one of the dispensaries, stated that they would seek damages in court for anything that was lost or destroyed in the raid.

The situation started last year, when in February, Vallejo police raided around six dispensaries, charging them with marijuana distribution. Given that all six of these organizations were legally following state law, the cases were dropped.

Since these raids, which cost the city hundreds of thousands of dollars, Vallejo Police Department has cut their staff from roughly 150, down to 90, which has resulted in an increase in crime.

Since the raids, the number of dispensaries in the city has increased, prompting the city council, without logic, to place a moratorium this month on any new medical marijuana business.

Did we mention that this was the same city that was so unstable with their finances, that they were forced to file bankruptcy?