The war on drugs is an unequivocal failure. Billions of dollars have been put into a policy which has overinflated our prisons with nonviolent individuals, created a dangerous 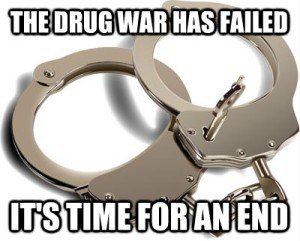 and brutal black market, and led to an erosion of basic civil liberties.

As the failures of this policy become clear, the global conversation continues to gain momentum. United Nations reports have declared the war on drugs a failure, and more than 80 percent of Americans believe the U.S. is losing this so-called “war”. Times are changing.

As the conversation heightens, and with the need for reform ever-growing, here are a few of the primary reasons why we should swiftly and effectively end our war on drugs:

Drug cartels, and the tens of thousands of deaths that have come with their existence, are due directly to our war on drugs. Without the illegal drug market, these cartels (and other criminal syndicates that make a majority of their profit from selling illegal substances) would be put out of business, or at least have their largest, easiest source of funding cut off. Ending the war on drugs will save countless lives.

When someone is labeled a drug felon – which simple possession often does – it permanently alters their life. Student loans and grants become hard or even impossible to get, as do jobs and many housing opportunities. Often times individuals who are hit with these charges have to later resort to a life of crime simply to get by. Roughly 50 percent of all current inmates in federal prison were sentenced for nonviolent drug-related offenses. Putting these people behind bars, alongside violent criminals, is inhumane, and often leads to offenders becoming hardened and de-socialized.

Many have heard this statistic before, but it’s a powerful one: the United States possesses 5% of the world’s population, yet harbors 25% of the world’s prisoners. The failed war on drugs (which has primarily been a war on cannabis) plays a major role in this.

Reports show that compared to Caucasians, African Americans are 2.5 times more likely to be arrested for cannabis, and 8 times more likely to be jailed for a drug offense. This is despite the fact that statistically African Americans don’t use drugs at a higher rate. This doesn’t come as a surprise when DEA (Drug Enforcement Administration) agents are being told not to enforce drug laws in “white areas”.

More than a trillion dollars of taxpayers’ money has gone into fighting a massive war that the government can never win. A hardline approach to drug use has not diminished their presence in our society. Instead, it has enriched criminal organizations who choose to sell them, done nothing to decrease usage rates, and taken a mass population of nonviolent citizens and labeled them as lifelong criminals. In a faltering economy, the money spent on this ridiculous war cannot be justified.

Over a decade ago, Portugal removed the criminal penalties associated with the possession of all drugs (not intended for sale); the results were a resounding success. Under this model (which we’re not advocating as perfect, but is drastically better than what we currently have), usage rates among minors decreased, as did the overall number of people consuming drugs. In addition, there was a large decrease in addiction rates, as well as in the rates of overdoses and STDs, likely due to the government offering treatment without threat of legal ramifications.

These certainly aren’t the only reasons to put an end to this travesty of a “war”, but they’re some of the strongest. We urge everyone not to settle for cannabis legalization, but to work towards ending the drug war in its entirety, as the policy has caused nothing but pain, while having no degree of success. It’s time for an end.