A new double-blind, placebo-controlled study conducted by the University College London has found that cannabis can help reduce tobacco consumption rates. Published in the journal Addictive Behaviors, the study analyzed the effect of cannabidiol (or CBD), a primary 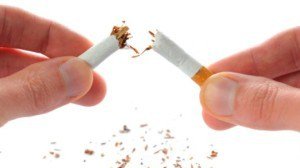 component in cannabis, on 24 tobacco smokers who wished to quit.

The CBD was administered via inhalers over the course of a week; 12 of the participants were given inhalers filled with CBD, while the other 12 were given placebo inhalers. The subjects were instructed to take a puff from their inhalers whenever they felt the urge to smoke tobacco. Over the course of the trial week, the subjects who were given the placebo inhalers exhibited no difference in tobacco consumption rates; however, those who used the CBD inhalers showed a 40% decrease in the amount of cigarettes smoked during treatment.

The study concludes, “These preliminary data, combined with the strong preclinical rationale for use of this compound, suggest CBD to be a potential treatment for nicotine addiction that warrants further exploration.”