Mexico’s Supreme Court on Wednesday ruled that the nation’s ban on recreational marijuana is unconstitutional, effectively leaving it to lawmakers to regulate consumption of the plant, reports the Associated Press. 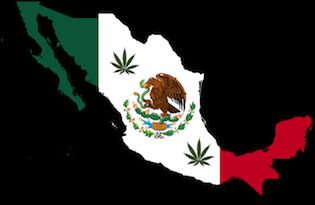 In its ruling he court found that adults have a fundamental right to personal development which lets them decide their recreational activities without interference from the state.

“That right is not absolute, and the consumption of certain substances may be regulated, but the effects provoked by marijuana do not justify an absolute prohibition of its consumption,” the ruling said.

The high court ordered the Federal Commission for the Protection against Sanitary Risk to authorize the complainants to consume marijuana, though not to commercialize it or use other drugs.

The two rulings Wednesday followed three similar ones between 2015 and 2017, and under Mexican law five decisions on a related issue set a standard that applies more broadly.

“With the existence of five precedents in the same vein on the subject, the judgment will be mandatory for all courts in the country,” the high tribunal concluded.

The Associated Press noted that the ruling technically doesn’t legalize recreational use, but establishes “that courts must allow it, but it is still up to each individual to press his or her case in the judicial system.”