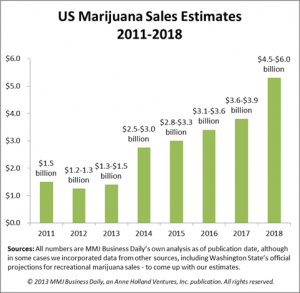 ijuana Business Daily published new research which shows that in 2013, there will be between $1.3 – $1.5 billion in state-authorized sales of marijuana to patients in the U.S.

A clear showing of how drastic the industry is growing, the group’s research finds that by next year, sales will likely double, and will be between $2.5 – $3 billion for the year. The industry is expected the grow consistently from then on: It’s predicted to be up to four times its current size by 2018, with a market size of $4.5 – $6 billion per year.

The market would of likely been much higher this year, if not for federal raids in 2012, which clearly the industry has had no problem recovering from.

The group used a wide variety of data, including state research projections, to come to their conclusions.

The report will be published in the Marijuana Business Factbook 2013, a 180-page industry report which ships on March 25th.