For this year’s NASCAR Brickyard 400 in Indianapolis – one of the biggest races of the season – attendees will be presented with a bold new video message regarding recreational enjoyment: 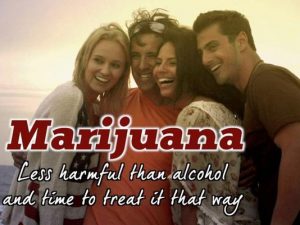 Marijuana is safer than alcohol, and should be treated like it: This message will be presented in a video ad running on a billboard right outside of the race – it will be running all weekend (you can view the full video below).

“We think it’s critical that the public recognize that marijuana is objectively less harmful than alcohol,” says Mason Tvert, who’s Communications Director for the Marijuana Policy Project; “We wanted to reach out to an audience that clearly appreciates that adults should be able to use beer and alcohol responsibly. They should also be able to use marijuana responsibly – since it’s less harmful.”

The billboard will mark the first time that a pro-cannabis ad has been placed so close to the front gate of a major Nascar race.

You can watch the full video ad below: