According to recently released statistics from the DEA, eradication of cannabis plants in the U.S

From the mind-boggling rate of over 10 million plants destroyed in both 2009 and 2010, numbers have plummeted to 3.9 million in 2012. Although these numbers remain absurdly high, the massive decrease gives hope that times are changing, and that our country is taking steps in the right direction.

In their 2014 budget proposal the DEA claims the drop-off is due, in part, to California, stating fiscal short 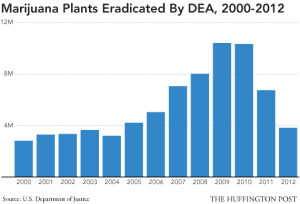 ages in the state resulted in “the decreased availability of local law enforcement personnel to assist in eradication efforts”, and less people growing on public lands, opting instead for private agricultural grow areas. They state some of these agricultural grow sites “operated under the guise of its state’s medicinal marijuana laws”.

As more and more states reform their marijuana policies, this numbers will likely continue to decrease.