“Marijuana is Safer” Billboard Goes Up in Portland, Oregon

“Marijuana is Safer” Billboard Goes Up in Portland, Oregon

The Marijuana Policy Project has introduced a new billboard they’ve posted in Portland, Oregon, and will be holding a press conference tomorrow at 10:30am to make an official announcement. The billboard points out that marijuana is a safer substance than either beer or wine, linking 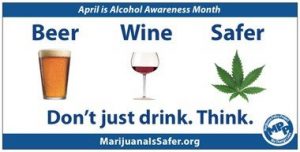 onlookers to the site MarijuanaIsSafer.org, which redirects to a factsheet on MPP’s website comparing alcohol with marijuana, pointing out facts such as marijuana has no overdose level.

The billboard will be just blocks away from the city’s annual beer and win festival, which takes place this weekend.

“Our goal is to make this year’s beer and wine festivals as educational as they are enjoyable…We simply want attendees who are drinking to think about the fact that marijuana is objectively less harmful than the pint of beer or glass of wine they have in their hands”, stated Roy Kaufmann, Oregon representative of the Marijuana Policy Project, to The Oregonian.

She continues, “We know Oregonians are proud of our craft beer, wine and spirits, but the objective fact remains that marijuana is less toxic and less addictive than alcohol, and it is far less likely to contribute to violent and reckless behavior”.

Oregon lawmakers will be holding a public hearing on a measure to legalize cannabis in the state on April 2nd. If the bill falls through, proponents of last year’s Measure 80, which would of legalized marijuana and was on last year’s ballot in Oregon, have vowed to run further initiatives in an attempt to put legalization to a vote in Oregon in 2014.

The billboard is posted at Southwest 13th Avenue and Southwest Alder.