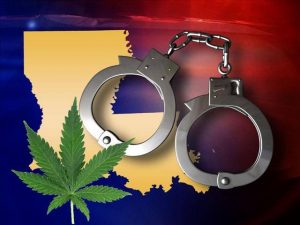 A measure designed to significantly reduced the penalties for marijuana possession in Louisiana has taken another step forward this morning as the state’s Senate Judiciary committee approved the proposal with a 4 to 2 vote. The measure (House Bill 103) – which has already been approved by the House – now heads to the full Senate, where its passage would send it to the governor for final approval.

Under current Louisiana law – which has some of the strictest marijuana policies in the nation –  an individual can be sentenced to 5 years in prison for their 2nd cannabis possession charge, and up to 20 years for their 3rd. Those who are found with marijuana for the 4th time can get life in prison.

If House Bill 103 becomes law, these charges would be greatly reduced.

Although this measure is far from perfect, it’s progress nonetheless, and advocates in the state should be contacting their senators and governor, urging them to support this commonsense proposal (those in Louisiana can look up their district’s legislators and governor by clicking here).

According to the bill’s fiscal note – compiled by the state – the measure would save Louisiana $2.2 million in 2014 alone.