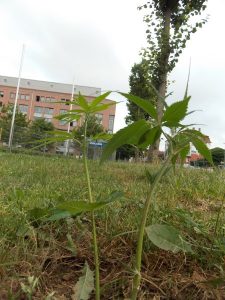 A few cannabis plants sprout up in front of the police station in Göttingen, Germany.

Activists in Germany are demanding the legalization of cannabis – and they have taken to the city streets (and flower beds) with their message. A group called A Few Autonomous Flower Children have announced that they are responsible for the planting of several pounds of cannabis seeds around the town of Göttingen, Germany. The group organized an effort to cover the city with seeds in June, and now their protest crops are sprouting up all over – in parks, flower beds, and even in front of the city’s police station.

“We can’t set eyes on this useful and beautiful plant because it’s absolutely forbidden in Germany to grow it,” said the group, asserting that they were acting “against the demonization of cannabis.”

These cannabis vigilantes have found support from another organization; the local chapter of the Green Youth (the youth branch of Germany’s Green Party). The Green Youth group organized a similar campaign last year, scattering seeds across the city as well. “The legalization of hemp is a matter of interest for us,” their spokesman said. “Now the plants are spread out across the whole city.”

Police have been less than amused over the situation, and have been trying to combat the rogue plants; but with more and more cropping up, they certainly have their hands full. According to police spokeswoman Jasmin Kaatz, everywhere seeds could be sown, cannabis plants are sprouting.