by TheJointBlog
0 comments
Activists seeking to legalize marijuana for all adults in Oklahoma have officially filed an initiative to do just that.

Michelle Tilley and Ryan Kiesel, executive director of the American Civil Liberties Union of Oklahoma, filed State Question 807 with the Oklahoma Secretary of State’s Office this week. Once the language of the initiative passes through a review as well as a challenge period (where it can be challenged on its legal viability), they will have 90 days to collect 178,000 signatures from registered Oklahoma voters. This is the second time the pair has filed such an initiative. 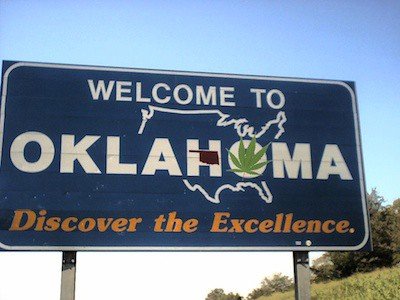 “An overwhelming majority of Oklahomans from across the political spectrum support reforming the marijuana laws in Oklahoma,” Kiesel said in a press release. “The time has come to build a system of reasonable regulations that invests millions in education and health care.”

Tilley says that due to concerns from the state’s medical marijuana community, the proposal was edited slightly to ensure that it doesn’t interfere with the system patients currently take part in.

“The new ballot initiative strengthens the language of the previously filed initiative to ensure that we are crystal clear that this program does not adversely affect the current Oklahoma medical marijuana industry or its patients,” said Tilley in a press release. “While we did not foresee any issues with our original language, we are strong supporters of Oklahoma’s medical marijuana programs, and we felt it was worthwhile to eliminate any uncertainty.”

An entirely separate initiative to decriminalize – but not legalize – marijuana was also filed by Tulsa resident Paul Tay.

If Oklahoma does legalize marijuana, they would join 11 other states which have done the same: Washington, Colorado, Oregon, California, Massachusetts, Maine, Michigan, Alaska, Nevada, Illinois and Vermont.