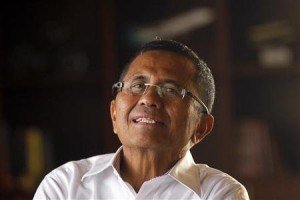 In Indonesia, marijuana laws are some of the strictest in the world, with distribution being punishable by death (by firing squad). Despite this, and despite the nation’s sometimes regressive nature when it comes to social and political movements such as marijuana legalization, State Enterprises Minister and presidential candidate Dahlan Iskan has come out in support of the nation manufacturing marijuana, instead of eradicating it, in order for it to be used as medicine to those who can benefit from it.

“This idea was proposed by a pharmacist, who said marijuana seeds can be used as medicine for heart disease and cancer,” Minister Iskan stated to a local newspaper this week, “Why doesn’t the ministry consider managing marijuana plantations as an alternative to other medicines, instead of always burning it?”

Other countries, like the Czech Republic, have taken similar approaches to marijuana, having recently legalized its sell through standard pharmacies.

As well as being the State Enterprises Minister, Dahlan Iskan is considered to be one of the top candidates for president in the upcoming election.