Among those who support marijuana law reform, many advocates support, and are working towards, decriminalizing marijuana – making it no longer a criminal offense, without legalizing its sale, and in many instances maintaining a civil infracti 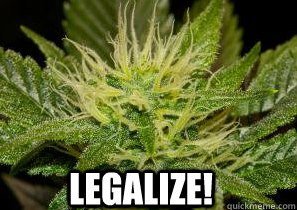 on (such as a traffic ticket). Although this is a great starting point, some see it as the endgame. In the public, this is the same; support for decriminalization – such as in this recent poll out of Washington D.C. – is typically 10%-20% higher than support for legalization. The reason isn’t hard to understand – people realize that marijuana isn’t worthy of jail time, and don’t want people’s lives ruined for its usage, but they’re worried about the potential ramifications of legalization (likely because of propaganda), or if they’re advocates of marijuana, maybe they’re worried of a government takeover, or just feel it shouldn’t be so out in the open.

In reality, whether as a consumer or a member of the general public who’s never consumed and never will, decriminalization has no where near the positive benefits of legalization, or a full repeal of cannabis prohibition for adults (including cultivation and sale).

Under a decriminalized model, you free up jail space, allow police to focus on violent crimes, and save the government a bunch of money. However, this model doesn’t account for the black market, which has become a huge producer of dangerous criminal syndicates. In some instances the average Joe sells marijuana on the black market, no violence is involved, all is well. However, on the other end of the spectrum, Mexican drug cartels – responsible for tens of thousands of deaths – get roughly 60% of their profits from shipping marijuana to America.

Decriminalization doesn’t solve this – it allows people to possess marijuana, while forcing them to the black market if they wish to purchase it. By legalizing the sale of marijuana – as long as it’s taxed at a responsible rate (a standard sales tax, for example) – individuals will have legal and affordable access to marijuana, allowing them to stay away from the black market that enriches criminal organizations.

In this scenario, those who are currently purchasing from friends or dealers they’ve grown a relationship with can continue to do so, and would certainly be facing no more potential consequence than they are currently (under an ideal situation, it wouldn’t be illegal to sell small amounts of marijuana between each other, just as it wouldn’t be to sell someone a piece of gum). For those who are buying on the street, they wouldn’t need to do so anymore, and would have better quality control over their product. If legalization occurs such as in Colorado, those currently dealing would be authorized to become licensed to run a retail outlet or cultivation center – not something that might be possible from the start for many people, but certainly a goal that’s likely to pay off huge for those getting involved in the industry early on.

Beyond that, legalization allows for more options, and more competition. Advocates must fight, hard, to stop a corporate takeover of marijuana – but as long as individuals are allowed to apply, and can get accepted for licenses, there will always be the option of great, fair outlets opening, which would force the government-run outlets to change their practices to compete. If in an instance the taxes are too high, which is possible with so many tax-hungry politicians, a black market might run simultaneous, albeit much smaller. In this instance, those selling on the black market will need to up their quality in order to compete with legal sales – even if the bud’s a little cheaper, people won’t need to settle for schwag if they can pay more for better quality, at a retail outlet.

Legalization, if done right, would also drastically reduce the price of marijuana, making it easily accessible to those who can benefit from it, such as patients. A study from 2010 done by the Rand Corporation found that legalized marijuana, without a hefty tax, could lower the price to around $40-$50 an ounce, roughly 20% of current black market pricing.

Although this may increase usage rates, this is actually another benefit. Recent studies have shown that in states which have legalized medical marijuana, usage rates have increased slightly, which has reduced the overall number of suicides, especially among young adults. In addition, it significantly reduced traffic fatalities, likely based on the fact that it reduced the number of accidents where a drunk driver was involved.

As we move forward, efforts towards decriminalization must be praised, and fought for. However, advocates should always be clear that the answer to the huge problem of prohibition is full legalization for adults.