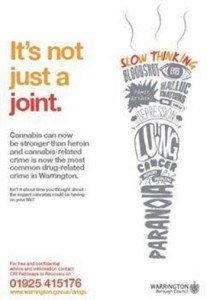 he slogan “It’s not just a joint.” The flyers for this campaign presented obvious prohibitionist propaganda, such as claims that “Cannabis can now be stronger than heroin”, and insinuations that cannabis use causes lung cancer. These ads were intended to run through September on buses and bus stop shelters – but after immense public backlash from citizens, the council has not only pulled the ad, they’ve issued an apology.

An in-pouring of messages came from members of the community upset over the advertisements shortly after the campaign began. Soon the council’s Facebook page was bombarded with more than 450 angry comments – at which point the council took the page down. NORML UK spoke on the situation as well, calling the ad’s deceitful messaging “irresponsible and dangerous”.

A spokesperson for the city council announced the retraction of the ad, admitting to its questionable nature, stating that “Uncertainty has arisen regarding some of the statistical data supporting the campaign.” Funding for the anti-cannabis campaign has been pulled, and the council has offered a public apology for the ad: “The council apologises to anybody who may feel that they were misled. The campaign has been postponed pending a review of some of the statistical data which supported the campaign.”

In lieu of these recent happenings, a local news source, the Warrington Guardian, has conducted a poll inquiring residents’ opinion on legalization. When asked outright “Should cannabis be made legal?”, a whopping 85% answered “Yes”, with only 13% saying “No”, and a slim margin of 2% answering that they were unsure.