“It’s time to decriminalize, tax and regulate marijuana,” California’s Lt. Governor Gavin Newsom stated today, “It’s time we own up to the fact that our drug laws have done far more harm than good. The war on drugs is an abject failure.” Newsom was speaking in fro 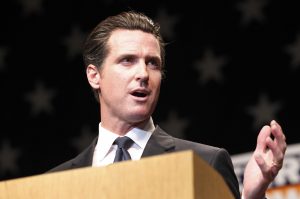 nt of delegates at the annual California Democratic Party convention. Newsom ran for governor in 2010, and has announced that he’ll run again in 2016 if Governor Jerry Brown doesn’t seek reelection.

Newsom, who is formerly the mayor of San Francisco, officially came out in support of legalizing marijuana in December, a story that blew up in the media, including it being on the front page of the New York Times. “These laws just don’t make sense anymore,” Newsom stated, “it’s time for politicians to come out of the closet on this.”

Newsom’s continued support for legalization is important in a state where advocates continue to work towards getting an initiative on the ballot.

With a strong majority of Americans now in support of legalization, politicians would be wise to take Newsom’s approach to marijuana law reform.