Last week Kentucky’s Senate voted, 31-6, to approve legislation that would legalize hemp in the state. This is after their Senate Committee on Agriculture voted unanimously to put it to a full Senate vote. 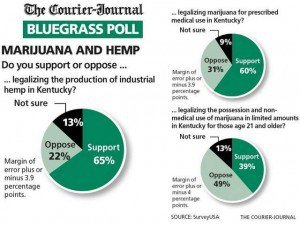 Now, lawmakers can rest assured that they have the clear majority backing of their constituents.

In addition, roughly 40% of those in the state support legalizing the substance for recreational purposes, with just 49% opposed. These are impressive numbers, especially considering that the number of undecided voters – 13% – could push support for legalization in to the majority.

Advocates have plenty of reason to be optimistic.