Here’s where the 2020 Presidential Candidates Stand on Cannabis 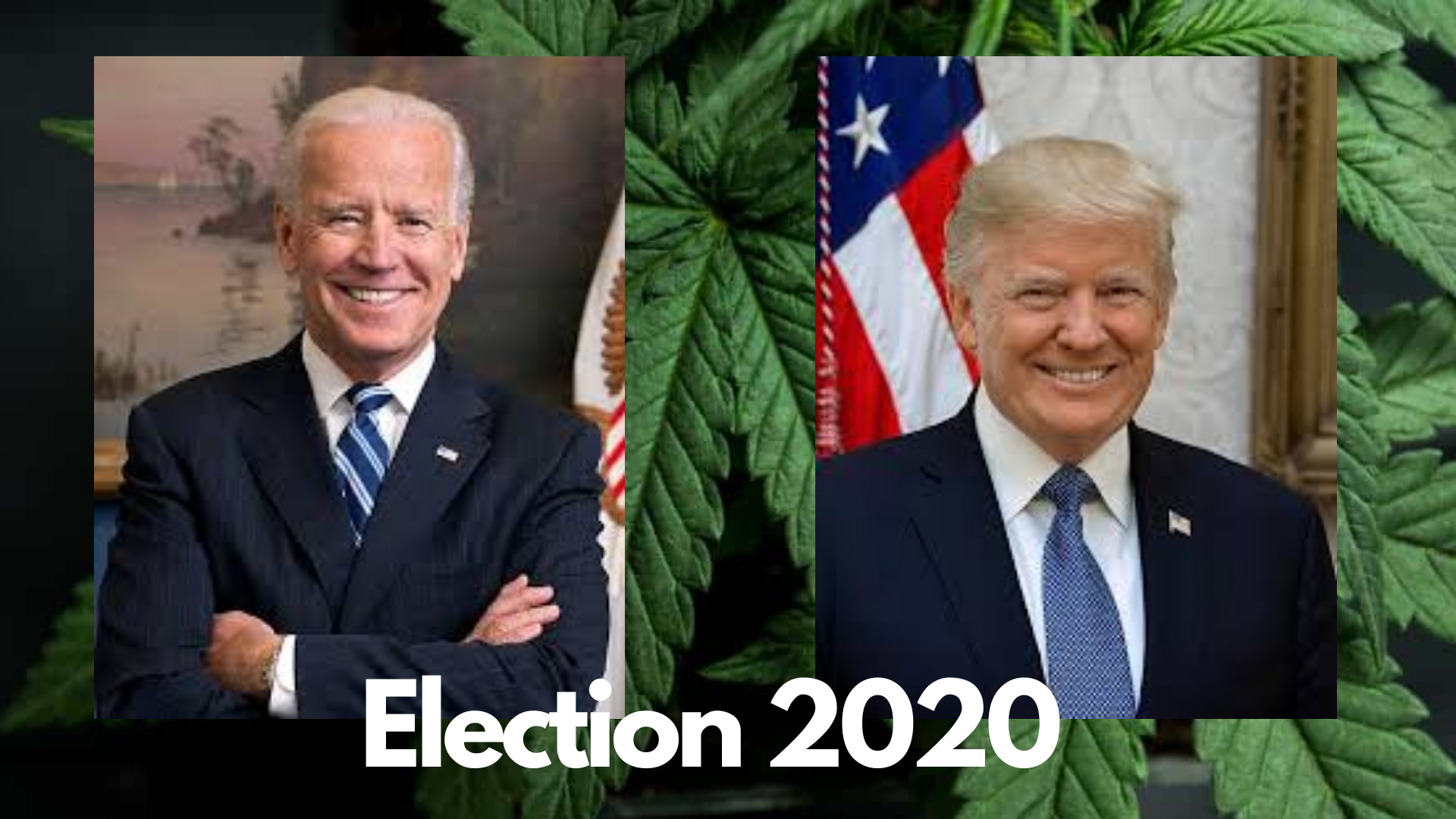 Here’s where the 2020 Presidential Candidates Stand on Cannabis

Come Nov. 3, 2020 Americans will elect a new president- or re-elect the present President of the United States.

Political pundits believe that the electoral landscape today differs from 2016. A large section of the public cares about cannabis. And others are looking for significant distinctions to support cannabis law changes.

Supporting legalization is not enough. A candidate’s attitude towards cannabis should include an array of issues such as changes in the social justice and criminal justice system.

In addition, the presidentiables should talk about the potential economic benefits of cannabis from job creation to taxes that businesses pay to boost the economy.

A patient or a leisure seeker should be mindful of the cannabis laws, otherwise your trip to paradise might end up in a nightmare.

Possession of cannabis in the U.S. is considered illegal, the federal law classifies this as a Schedule I drug. Along with other controlled substances such as methamphetamine, heroin, and cocaine, the federal government views it as a substance of abuse with no medicinal value. The federal law prohibits doctors to prescribe cannabis for medication, but can recommend it under the Fifth Amendment.

Application of the law is applied to persons who own, nurture, or distribute cannabis in enormous quantities.

The law on cannabis use varies from state-to-state and penalties differ depending on the gravity of the violation.

Let us take a look at some California state laws. We pick California because it was the first state to legalize marijuana for its medicinal use and it is the most populous state in the U.S.

The controversial Donald Trump is sending mixed signals with his stand on the legalization of marijuana.

In his last presidential campaign in 2015, he recognized the medicinal benefits of cannabis but not its adult use. “I think it’s bad,” he said after being asked for his thoughts on Colorado legalizing recreational marijuana, “and I feel strongly about that.” Later in his campaign, this was modified to allowing individual states to decide whether to legalize.

So far, Trump was unclear in his plans regarding cannabis reforms. In December 2018, he did sign the Farm Bill with provisions for hemp legalization. And he would “probably” support the STATES Act, a bipartisan bill introduced by Sens. Cory Gardner (R) of Colorado and Elizabeth Warren (D) of Massachusetts, that would allow states to write their own marijuana policies, remove marijuana from the list in the CSA, and decriminalize it federally.

Despite Trump’s support of hemp and suggested federalist approach to cannabis legalization, industry experts are still skeptical. He picked an anti-cannabis attorney-general, Jeff Sessions, whose major move was to rescind the Cole Memo in 2018.

After signing a spending bill on February 15, 2019, Trump singled out an included provision that prevents the Justice Department from using funds to interfere with medical marijuana. He stated that he “will treat this provision consistent with the President’s constitutional responsibility to faithfully execute the laws of the United States.” Trump was making it clear that he reserves the right to ignore the cannabis provision and interfere with state-legal marijuana. Remember that he made a similar comment in May 2017 when signing that fiscal year’s appropriations bill into law, and yet no raids against state-legal medical marijuana patients or providers followed.

Trump again tried to strike the policy to protect states’ rights on medical marijuana from the fiscal year 2021 proposed budget plan he released in February 2020.

Audio leaked from a private dinner in 2018 revealed that Trump believes that using marijuana makes a person “lose IQ points.”

A top Trump campaign spokesman in February 2020 doubled down on the administration’s anti-cannabis sentiment, stating that substances like marijuana “need to be kept illegal. That is the federal policy.”

We know that there is a gap between Trump’s words and deeds, let us see if he walks his talk or not.

In the swollen field of 2020 Democratic presidential hopefuls, support for some form of marijuana legalization is nearly universal. The only exception is former Vice President Joe Biden who is reluctant to join the marijuana community and the only Democratic candidate standing in the way of any cannabis legalization.

Throughout his career in the Senate, Biden sponsored and consistently voted for increasingly heavy-handed drug legislation. He introduced a bill that greenlit civil asset forfeiture, eliminated the possibility of bail for individuals charged with certain drug crimes, and mandated that the Justice Department “aggressively” combat drug offenders.

He also filed legislation that called for the establishment of boot camp-type prisons for offenders who tested positive for a controlled substance during an arrest, required that people on probation or parole successfully pass a drug test prior to sentencing, and directed support to the movie and television industry for “anti-drug messages.”

Biden was also the chief sponsor of the Biden-Thurmond Violent Crime Control Act of 1991, which among other things prohibited people convicted of drug misdemeanors from purchasing firearms, and increased penalties for the use of cannabis and other Schedule I substances in public housing. He later voted in favor of an amended version of the bill.

Biden appears to also oppose marijuana being used for therapeutic purposes. In 2007, he acknowledged that ending raids on medical marijuana users was necessary, but that he believed that “there’s got to be a better answer than marijuana” for addressing health issues and symptoms. He voiced the long-debunked theory in 2010 that marijuana serves as a “gateway drug” to dangerous substances.

Biden does not appear to have reversed his stance on marijuana, although it may have softened a bit. In January 2019, Biden acknowledged his hard-line cannabis past caused some long-term harms, telling the National Action Network, “I haven’t always been right, but I’ve always tried.”

Biden reiterated his opposition to full marijuana legalization prior to more studies on its effects being completed in an interview with The New York Times editorial board in January 2020. In March 2020, he expressed frustration over people thinking he still believes marijuana is a gateway drug. In an interview with The Shade Room, he explained, “I don’t think it’s a gateway drug.”

Sen. Bernie Sanders dropped out of the presidential race on April 8, 2020 setting up a general election between President Donald Trump and former Vice President Joe Biden.

Throughout his long political career, Sen. Bernie Sanders has fought relentlessly for cannabis policy reform. He unveiled a criminal justice reform plan in August 2019 that includes proposals to legalize marijuana and expunge past cannabis-related convictions.

Fighting for cannabis legalization before nearly every other lawmaker, Sanders introduced the first-ever Senate bill to end federal cannabis prohibition, the Ending Federal Marijuana Prohibition Act of 2015. No other senators backed his bill at the time. Twenty years prior, Sanders backed a House bill to legalize and regulate marijuana under federal law. He also made the legalization of cannabis a central issue in his campaign for president in 2016, and was the first major presidential candidate to ever endorse marijuana legalization. During his 16 years in the U.S. House, Sanders has voted in favor of amendments that protected legal medical marijuana states from federal intervention several times.

Sanders promised to push forward with the movement he has propelled since the 2016 election. “Let us go forward together, the struggle continues,” he said in closing his remarks to supporters.

Billionaire philanthropist Tom Steyer withdrew from the presidential race on Feb. 29, 2020, for the legalization of marijuana and opioid decriminalization. Steyer endorsed Jerod Nadler’s Marijuana Opportunity Reinvestment and Expungement (MORE) Act which would deschedule cannabis, expunge prior convictions and set aside tax revenue to support communities affected by the drug war.

Tom previously discussed his intention to provide financial services to minority- and women-owned marijuana companies through his and his wife’s community bank. But federal laws prohibit it, the business would be at risk if they pursue.

Mike Bloomberg, the former mayor of New York City dropped out from the presidential race on March 4, 2020. He has not changed his views and is explicitly opposed to the legalization of marijuana. The issue of legalization is left to the state, taking the health and safety of the public into account.

However, Mike strongly supports decriminalizing the use and possession of marijuana nationwide, commuting all existing sentences, and expunge all records.

Bloomberg believes that further scientific study is required to assess the health effects of marijuana.

His stop and frisk practice when he was mayor in New York City had over 440,000 arrests for marijuana possession earned him a huge trust deficit and this new plan will change nothing.

Sen. Cory Booker withdrew from the presidential race on Jan. 13, 2020, he received a B+ grade on NORML’s New Jersey Scorecard.

Sen. Elizabeth Warren withdrew from the presidential race on March 5, 2020, a non-supporter of the adult-use cannabis bill in her state in 2016 has reformed her stance on the issue and evolved into a pro-cannabis advocate.

On June 7, 2018 she introduced the STATES Act, a bill that will allow each state the options to legalize or prohibit recreational or medical use of marijuana. That same day, Warren co-sponsored the Marijuana Justice Act, removing cannabis from the list of the Controlled Substances Act (CSA).

During her speech on Feb. 23, 2020, Warren would reduce federal spending on law enforcement to states that won’t legalize marijuana. Only marijuana-friendly people will be assigned to DEA, DOJ, and FDA to get involved in the legalization process.

However, it remains to be seen if she is 100% supporting the legalization of marijuana.

Rep. Tulsi Gabbard dropped out from the presidential race on March 19, 2020, has regularly pushed for major cannabis reform and been vocal in her cannabis advocacy. Gabbard has consistently voted in favor of marijuana amendments on the House floor, including two measures aimed at protecting states with legalized medical marijuana, and a separate, broader proposal to shield all marijuana states.

In July 2019, Gabbard filed the Marijuana Opportunity Reinvestment and Expungement Act, a comprehensive marijuana reform bill that decriminalizes marijuana under federal law, expunges prior convictions, and funds grants aimed at correcting historical injustices that have disproportionately impacted communities of color and low-income communities.

Sen. Amy Klobuchar withdrew from the presidential race on March 2, 2020, she has regularly supported cannabis reform legislation introduced by her colleagues. Only recently did she come out in full support of legalizing recreational marijuana at the federal level, and the announcement came in the form of a fairly muted statement.

Like many of the other Democratic nominees, Klobuchar’s stance on marijuana has evolved over time. In a 1998 debate for Hennepin County attorney, she voiced opposition to the legalization of marijuana. She once held a D rating from the marijuana advocacy organization NORML, indicating a “hard on drugs stance,” but has since upped her grade to a B during her time in the Senate.

The presidential race left two men standing, Republican re-electionist Donald Trump and Democrat nominated Joe Biden. But, the chances of getting the top seat in the White House goes beyond cannabis.

The recent death of George Floyd in Minneapolis, Minnesota drew protests and demonstrations. This spread to over 100 cities throughout the U.S. and internationally. What started as peaceful became violent many stores were ransacked and damaged, buildings were set on fire, a police precinct was smashed, and skirmishes with the police.

The COVID-19 pandemic left millions of Americans unemployed and severely battered the economy.

While Trump is busy solving the nation’s problems Biden is trying to present himself as the calm, compassionate alternative choice for the presidency.

Right now, it’s Biden by a slim margin. In the months to come, Biden can exploit Trump’s weaknesses and work on his poor enthusiasm and weak voter commitment.