It would be funny, if it wasn’t so pathetic.

In order to crackdown on cannabis cultivators, who they label as hardened criminals, the “c 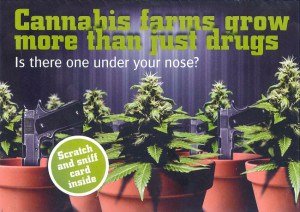 harity” organization Crimstoppers has recently launched “The Crimstopper Initiative“, which aims at getting people to turn in others for growing cannabis. Their method? Cannabis scratch-n-sniff cards.

The green and black cards, which will be sent to thousands of homes in the UK, releases a scent that apparently replicates the smell of cannabis when scratched.

According to Roger Critchell, director of operations at Crimestoppers: “We are distributing scratch and sniff cards because not many people know how to recognise the signs of cannabis cultivation happening in their neighbourhood…Many are also not familiar with the established links between this crime and serious organised crime.”

The group, of course, doesn’t state any actual research indicating this to be true, instead noting that there was a 15% rise in grow opera 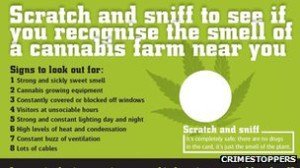 tions from 2011 to 2012. There’s been no indication that this increase is in any way associated with organized or violent crimes.

The initiative began in Holland three years ago, where 30,000 of these cards were distributed.

Unfortunately, this ridiculous ploy could very well lead to further imprisonment of otherwise law-abiding citizens who are growing cannabis.

Recent polling has found that 53% in the UK support either legalizing or decriminalizing cannabis.